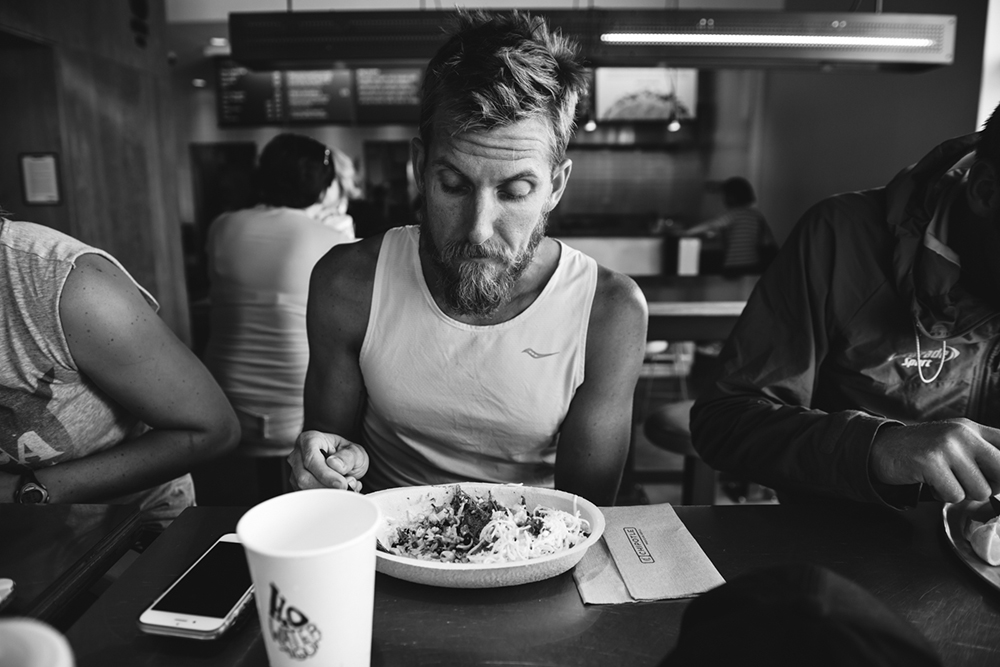 How did you prepare for the run across the USA?

Bryce Carlson: I felt the most important thing I could do was accumulate road miles in my legs. About 15 months before the run across the USA began, I put together a race calendar that included the Keys 100 Miles down in Florida and the Spartathlon in Greece. Both races would be long, hot, and on roads. Conditions I knew I’d face on my long journey. These races represented intermediate goals that really excited me, motivated my training, and kept me on track.

What were the keys to avoid inflammation and injury?

Bryce Carlson: I tried to eat fairly healthfully, very mindfully seeking out foods and/or beverages high in antioxidants. For example, I frequently consumed a pint of blueberries at the end of a day’s run. I also frequently consumed a glass or two of red wine each night. I also took a multivitamin every day and an omega-3 fatty acid supplement. Apart from diet, whenever we had access to a hotel pool, or cool river or stream, I would often soak to reduce any swelling, cool down, and get blood flowing to facilitate recovery. In terms of injury, I think the key was listening to my body and making adjustments to pace, strategy, and/or running gate. Almost all the runners experienced significant swelling and pain after about 1 week of running, which went away by the end of week 2 and 3 because we all adjusted our pace to let our bodies adapt. Moving forward I felt I was walking a tightrope: If I pushed the pace too hard on any one day, I felt a little more sore the next day. If I pushed too hard again, I often felt the first signs of injury coming on. So the key was really just paying attention to what caused the symptoms and try to avoid those stresses while continuing to move forward as quickly as possible.

What parts of the body were most critical as miles accumulated over many weeks of running?

Bryce Carlson: This is hard to answer. I’d probably say our mind was most critical. It was really important to pay attention to how every part of the body was feeling, and then make adjustments to stay healthy and strong.

What was your daily routine while on the road?

Bryce Carlson: I woke up every morning around 6-6:30 am, packed up all my stuff, and made myself a quick breakfast and coffee. I would then run the days race stage (between 26.2 and 35 miles), and spend the rest of the day focused on recovery. I used a foam roller and massage stick, but otherwise performed no other training. Before the race across the USA began I was mostly running and performing yoga.

Did you have a specific nutrition plan?

Bryce Carlson: I tried to eat healthfully, which is my normal diet. But if I felt hungry, would eat what was nearby and available. That included plenty of fast food such as McDonald’s and Burger King hamburgers and milkshakes, and local beers on more than a few occasions. 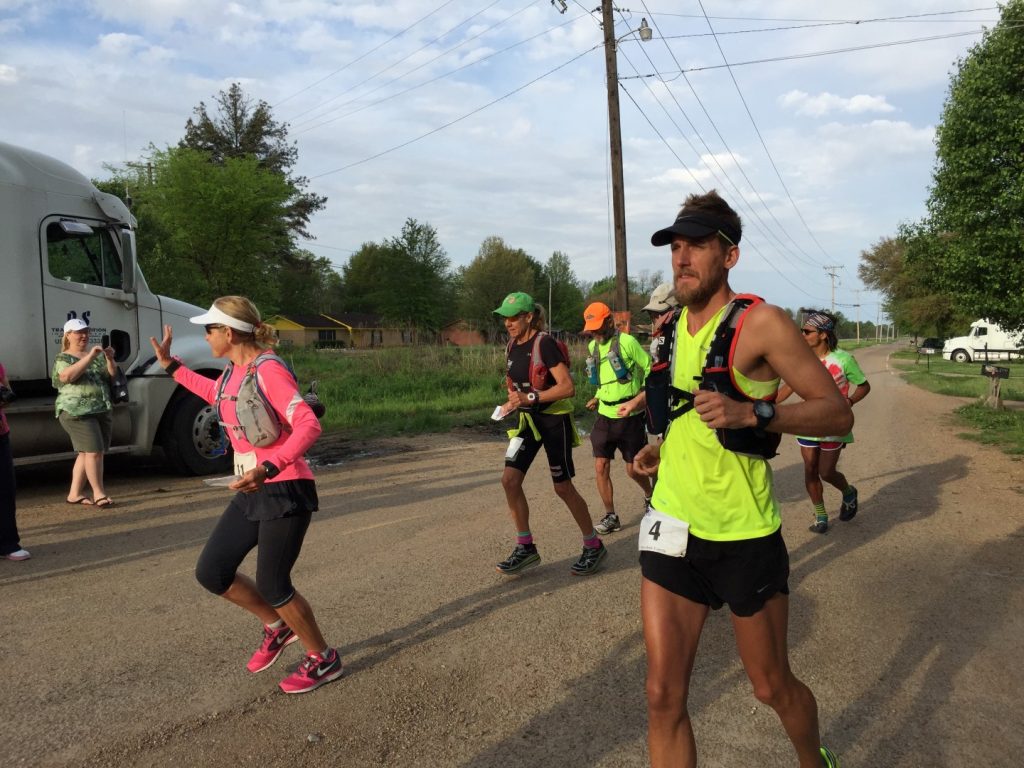 Bryce running in a group with his fellow comrades. Source: Bryce Carlson

What was your average pace at which you felt most comfortable?
Bryce Carlson: My pace probably averaged around 9 minutes per mile (5:35 min/km). Some days around 8:30, some days 9:30 depending on temperature, elevation change, etc.

Assuming your comfortable pace and if it wasn’t a group run, do you think it would have been possible to go further per day?

Bryce Carlson: I definitely could have gone further each day. Average pace might have slowed a bit. Pace was a trade off, faster pace and longer distances were possible if I had some recovery aids like massage, air conditioned sleeping quarters, real bed each night, etc.

How did your heart rate develop over the days and weeks on the road?

Bryce Carlson: I tried to pay attention to heart rate early in the run, but quickly lost interest in the first few days. I found it much more effective and interesting to simply listen to my body and run by feel. Some days that meant I ran continuously and other days I utilized a run/walk schedule. I paid really close attention to how I felt and what pace I was running. After a couple weeks I developed a good sense of how hard I could push without detracting from my ability to push the next day.

Did you try to run next to paved roads on softer ground to reduce impact?

Bryce Carlson: Yes and no. Early on, when I was experiencing a lot of inflammation in my lower legs, I tried everything. Depending on what the surface to the sides of the road was, it may feel better or worse than the road itself. After the first few weeks, I think I stayed on the road the rest of the race because it was faster and felt fine.

Did you run all the time, or walk in between to get some rest while still making progress?

Bryce Carlson: I think most days I ran 9 minutes and walked 1 minute, or a similar schedule. I found I could sustain a faster overall pace that way. When I ran continuously I often found my pace getting progressively slower over the day. When I added the short walking breaks, I returned comfortably to a faster running pace that made up for the walking.

Did you run specific shoes/insoles or just whatever you were used to?

Bryce Carlson: I fell in love with the Saucony Triumph ISO. I alternated between 2 pairs at a time and went through a total of 7 pairs over the 3100 miles. 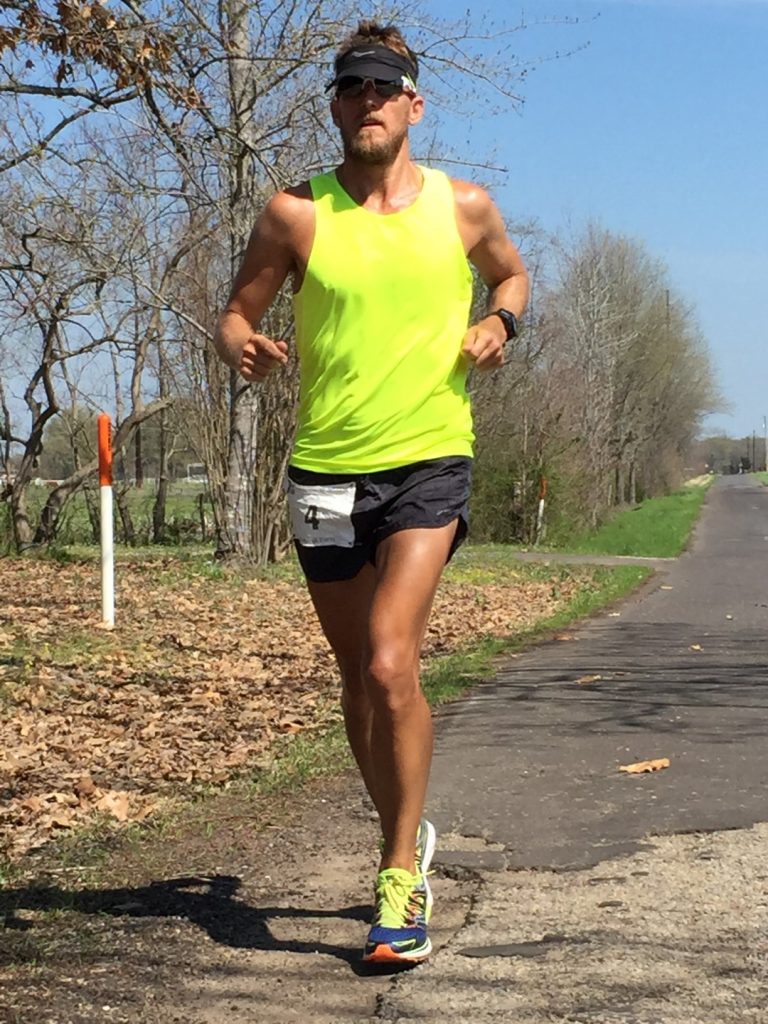 How long did you sleep each night on average?

Bryce Carlson: I don’t remember exactly, but I think I slept around 9 hours a night without napping during the day.

Did you use compression, massage, ointment etc to avoid injury and regenerate while on the road?

Bryce Carlson: I tried them all. I don’t think compression did anything for me, but self massage worked great to reduce soreness and stiffness the next day.

What were the most critical situations mentally?

Bryce Carlson: Managing group dynamics was surprisingly challenging. There were a number of moments throughout the race with great tension between the runners and race director, and occasionally between us individual runners. We had to sort it out though, since we were in close proximity to each other for 4.5 months!

From your current experience, what were some major mistakes or what would you do differently?

Bryce Carlson: Honestly, I wouldn’t do anything differently!

Do you have any further long distance projects coming up?

Bryce Carlson: I’m gearing up for the biggest adventure of my life. In the early summer of 2018, I’ll set off from St. Johns, Newfoundland (Canada) to row solo across the north Atlantic ocean, finishing several weeks later in England. I’ve never been overly motivated by records, but as of today, no American has ever completed a solo row across the North Atlantic.

We’ll follow your journey and wish you the best of success!

The first few weeks were rough. The body was experiencing a volume of running it wasn’t used to, and over the first 10 days especially, I began to experience a lot of inflammation in my lower legs. I then focused a lot on slowing down, icing them and staying off my feet in between runs. After about two weeks, the inflammation started going down, and I reached what I’d call a dynamic equilibrium for the rest of the run. I was able to run at a particular pace every day without experiencing any injury. If I pushed a little harder, I could feel that a number of different body systems were on the edge of injury, and so I’d back off to keep everything healthy.